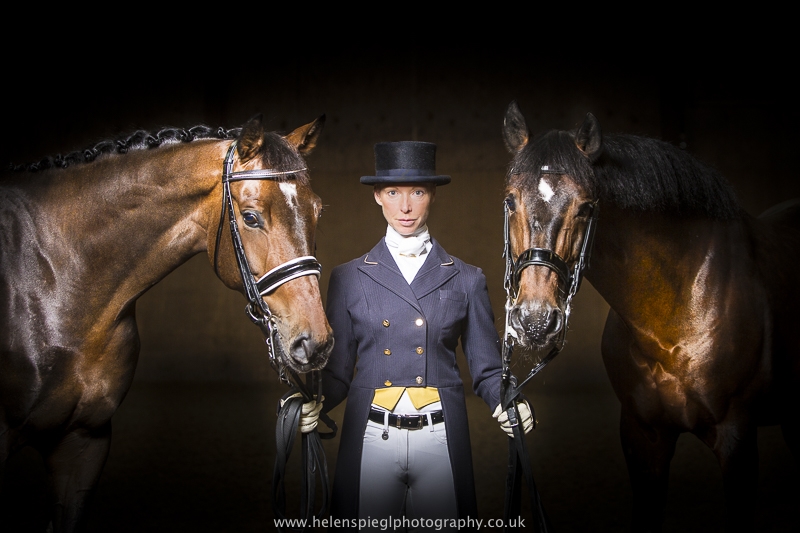 Tori’s equestrian journey began when she was just 11 years old on a neighbours pony, her very own first horse arrived the following year. At the age of 16 Tori’s coaching Career begun and by her 20th birthday she was running a successful Riding Centre, where Ben Hobday (International Eventer) was a young keen client. Along side this Tori gained one of her most valuable talents of understanding so many different horse problems as she trained young horses to affiliated competition standard in BSJA, BD and BE. Show Jumping and Team Chasing was Tori’s

initial passion she was a well known face on the local BSJA circuit. Dressage was only discovered through eventing and the partnership between Tori Peter and her Mentor, Friend and trainer JOANNA JACKSON began in 1996.Producing dressage horses became Tori’s new passion and this enabled her to slowly build up to buying her first dressage specific Stallion RH. Together they have travelled through the British Dressage levels reaching advanced level easily and successfully.

Currently riding at Prix St George, Tori is focused on reaching Grand Prix with RH and her training at home is well on the way to attaining that goal. Now with 2 World class young dressage horses, Tori’s competition career is looking very exciting for the future. New trainers have also pushed her abilities further and Tori is currently training with Goncalo Carvalho (Portuguese National Champion and Olympic rider at London 2012).

Tori is a true horse woman, showing  skills in several equestrian disciplines. In 2008 she was introduced to “Working Equitation” through her passion for Lusitano horses. Working Equitation is a four phase sport which combines the art & discipline of Classical dressage with agility & control required when working horses in the field with cattle. In April 2008 Tori became the owner of a little Lusitano stallion called Sueste. Neither Tori nor Sueste had experience in Working Equitation but with guidance from “Joao Lynce” a former World Champion, Tori successfully trained Sueste to the required international level of the sport and through competition results qualified to be a member of the Great Britain Working Equitation team 2008! The European championships were held in Sardinia, Italy where Tori and Sueste travelled. Tori and Sueste finished a credible 16th in Europe, the second highest GB team member in the competition. reselected to ride for the team in 2009  but lack of funding forced her withdrawal from the team and Sueste was sold to support her dressage training and career. Last year Sueste was discovered for sale in Portugal and Tori quickly bought him. Tori is now training Sueste for possible selection for Team GB in 2014 and is extremely happy to be reunited with her beloved Suestie.
Tori’s personality and ability to deliver understandable coaching has developed over the years strengthened by her competition record and her young horse training skills which have resulted in Tori being one of the most sought after coaches in the North West of England. Tori is currently training to become a dressage specific coach to the level of UKCC level 3, which will place her alongside some of the countries renowned dressage trainers.

Training can’t be taken lightly by Tori, and so driving her horses all the way to Portugal to train with Antonio do Vale to improve her knowledge of Working Equitation and to gain International competition experience is what she did! this video says it all!